SCCO Guideline Hourly rates were last set in 2010 by way of formal review in analysing Solicitors’ hourly rates data from across England and Wales. The guideline rates are a guide on the level of hourly rates which can reasonably be applied to Solicitors and other file handlers for the work they have completed and to reflect the skill and expertise of their grade.  Paying parties often rely upon the same as a means of limiting any enhancement on assessment, and the guidelines are split into National 2 (Outer City), National 1 (Inner City) and London 3, 2, 1, the latter of which relates to London City Solicitors.

The current guideline rates are set to take into account the area of the Solicitors Firm, allowing the rates to account for overheads depending on location, as well as the experience, skills and expertise of the Solicitor or file handler in question.  Court costs incurred in a case must be proportionate in line with the overriding objective, and the guidelines are often used as a base line to instil proportionality.

As the SCCO Guideline Hourly Rates are still based on rates fixed in 2010, Costs Lawyers have, for some time now, disputed their reasonableness and have argued that they are no longer fit to apply given inflation in the last ten years, which amounts to in excess of 25% for any rates in 2019.  Many believe that the guideline rates are significantly lower than they should be and that updated guidelines are required.

In 2015, Lord Dyson, who was Master of the Rolls at the time, took the decision to freeze the rates as he did not believe that an update was required.  It should be noted however, that there was insufficient data available for any proper review to be completed, and the Law Society has since sought to obtain from both Claimant and Defendant Solicitor parties for a fresh review to take place.

Master Whalan of the Senior Courts Costs Office (SCCO) has recently commented on the reasonableness of the SCCO Guideline Hourly Rates and their effectiveness in the case of PLK & Ors (Court of Protection Costs) [2020] EWHC B28.

Master Whalan stated that he believed the SCCO Guideline Hourly Rates could not be applied “reasonably or equitably without some form of monetary uplift that recognises the erosive effect of inflation and, no doubt, other commercial pressures since the last formal review in 2010”.

Whilst Master Whalan does not have the power to change the SCCO Guideline Hourly Rates; he advised other Costs Officers to exercise some flexibility at detailed assessment when applying the 2010 Guideline Hourly rates to the hourly rates claimed in Bills of Costs.  A Practice Note was made to this effect stipulating increased rates should apply from 2018 onwards.

He went on to state “If the hourly rates claimed fall within approximately 120% of the 2010 GHR, then they should be regarded as being prima facie reasonable. Rates claimed above this level will be correspondingly unreasonable.”

Master Whalan went on to provide a table in his ruling, which demonstrated the impact of a 20% uplift on the SCCO Guideline Hourly Rates.

“This approach can be adopted immediately and is applicable to all outstanding bills, regardless of whether the period is to 2018, 2019, 2020 or subsequently. It goes without saying that this approach is subject ultimately to the recommendations of Mr Justice Stewart and his hourly rates working group [reviewing the GHR] and the Civil Justice Council. Ultimately, the recommendations of the working group must be adopted in preference to my findings.”

The above decision was reached when assessing costs in the Court of Protection. Master Whalan consolidated four cases which were chosen to represent the costs claimed in different parts of England. The Applicant’s main argument was that the Court should assess the hourly rates claimed in the Bill by considering CPR 44.4(3) and use the SCCO Guideline Hourly Rates for an unrestricted detailed assessment. The Applicant’s argument rested mainly on asserting the specialism of deputies in Court of Protection cases and the prevalence of ‘overhead time and expense’.

Master Whalan recognised that Deputies required a level of specialism; however, he was not satisfied that the evidence supported that the Court of Protection had experienced an increase in hard and soft overheads.

Master Whalan, however, did accept that an uplift was necessary in order to reflect inflation since 2010, stating “I do not merely express some empathy for deputies engaged in CoP work; I recognise also the force in the submission that the failure to review the GHR since 2010 threatens the viability of work that is fundamental to the operation of the COP and the court system generally.” 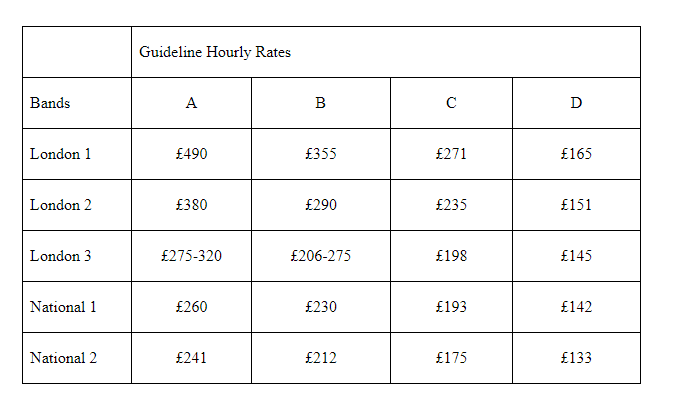 ARC Costs are specialist Costs Draftsmen and Costs Lawyers who can assist in the recovery of your costs. We can assist in costs budgeting, preparing Bills of Costs and negotiating costs with the other party to ensure maximum recovery of your costs. We can also represent you at detailed assessment and advance arguments concerning the hourly rates claimed, in order to justify enhanced rates if the case reasonably warrants the same.  We often recover hourly rates in excess of the SCCO Guideline Hourly Rates at Detailed Assessment on Multi Track matters. If you require our assistance, either as a receiving or paying party, please do not hesitate to contact one of our costs experts on 01204 397302, or email us at info@arccosts.co.uk.